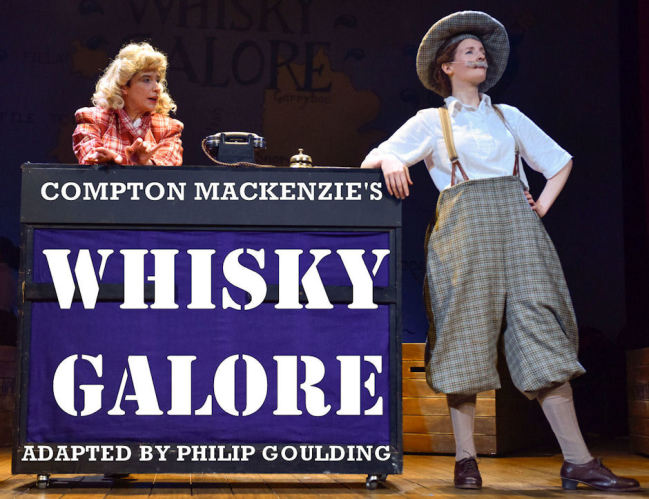 A Version for 7 Women

To inquire about rights and availability relating to professional productions of Whisky Galore contact:

Philip Goulding’s ingenious adaptation of Compton Mackenzie’s richly comic novel, Whisky Galore, takes its inspiration from the Osiris Players, an all-female troupe whose laudable mission was to bring theatre to the people. During the last war with most of the country’s youthful manhood in uniform, provincial theatre kept calm and carried on as best it could, often with women in breeches roles. During this same period of conflict a ship carrying vast amounts of whisky ran aground off a remote Scottish island, scattering its cargo. Under Kevin Shaw’s resourceful direction we find seven women, a sort of distaff Dinky Doos, playing the rich galaxy of characters of Mackenzie’s creation. It’s a tall order, especially since one of them, Juliet (Alicia Mackenzie), is said to be a last-minute replacement, but by dint of working non-stop, lugging their own scenery around, being all things to all men and all women and, not least, quick change experts, they pluckily pull it off. Fortunately, their formidable principal, Flora Bellerby (Sally Armstrong), who also doubles as narrator, is ever on hand to knock them into shape, in this stylised production, combining elements of rollicking physical theatre, panto and farce. Making liberal use of our imagination, we are whisked round two Scottish islands where the whisky, the water of Scottish life, has run out - and venture across perilous seas to the wreck where locals are salvaging the precious cargo. They are having deadly serious fun and games with the local Home Guard, the excisemen and local constabulary. It seems, however, that only the stuffy Captain Waggett (Isabel Ford), a prototype Mainwaring, is truly intent on confiscating the stuff and spoiling the party. The running joke is that almost everyone else is under its spell, unable to resist its pleasures. Indeed, everything on the island is so much better and functions much more smoothly when oiled by the amber fluid. It certainly helps the young George Campbell (Lila Clements), the stock diffident suitor, to stick up to his dry-as-dust teetotal mother (Christine Mackie) and win the hand of the fair Catriona Macleod (Joey Parsad). A couple of other precipitate marriages also seem to owe something to the persuasive powers of the malt. Sergeant-Major Fred Odd (Shuna Snow) is even willing to become Catholic to wed Peggy Macroon (Lila Clements) and Doctor Maclaren at last recognises the fading sultry charms of Annag (Isabel Ford).  (Andrew Liddle - Yorkshire Times) 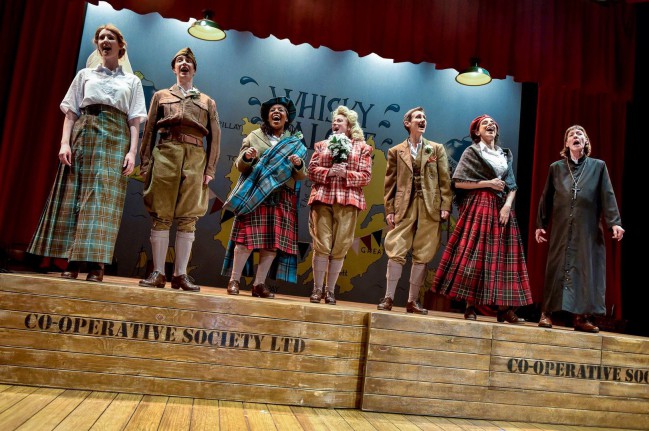 A superb all-female stage adaptation. An affectionate and delightful tribute to a beloved comedy classic. Full of rich comedy in terms of character, plot and observation. With an array of (sometimes hilariously extravagant and be-tartaned) costume, moustaches and the odd beard, we are treated to an assortment of males: islanders, clansmen, pukka officers, a dashing doctor, and a Jacobite bard. A voluptuous vamp and a querulous and judgemental mother see as much fun being played with female gender traits, too; and mention must also be made of Paddy, the pet dog. Bravo to Sally Armstrong, Lila Clements, Isabel Ford, Christine Mackie, Alicia McKenzie, Joey Parsad and Shuna Snow for being such a strong and versatile ensemble. (Philip Crispin – Independent Catholic News)

This is Whisky Galore  in a brand new light - and it works really well as a tribute to the feisty, fearless female touring companies of the post-war years. We can’t recommend it highly enough. (About Manchester)

Philip Goulding’s adaptation retains the authenticity of Mackenzie’s mellifluous prose and wittily divvies up 30 characters among a hard-working cast of seven. An enjoyably bright and breezy retelling of a classic comic tale. (The Stage) 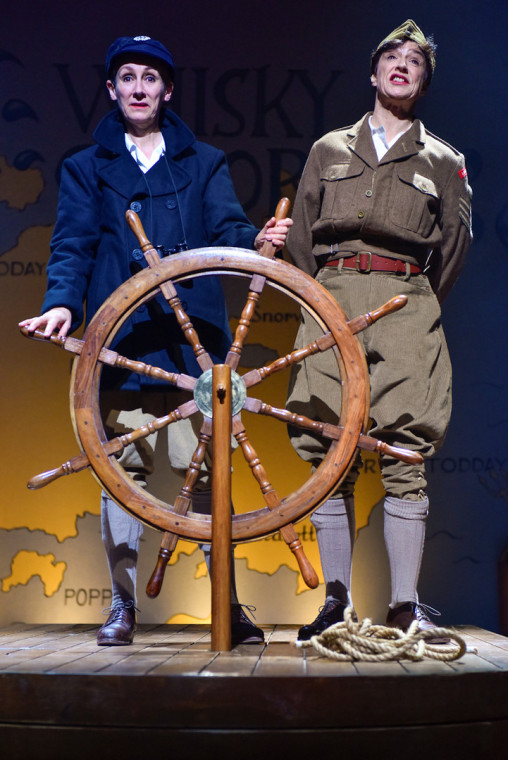 The Pallas Players are a joy to watch and the nature of Goulding’s adaptation means that all of the actors get their chance to shine. The production captures the absurdity of Mackenzie’s story and retains its joyful sense of mischief. (The Reviews Hub)

Retaining the Compton Mackenzie's original novel’s streak of anti-authoritarianism, the production cheers on the efforts of islanders to liberate the whisky while gently mocking the official attempts to stop them. “Did the Lord put us on this earth for jollification?” says a dour character disapprovingly. Well, if pure jollification is what you like, the sterling efforts of this modern-day company of women will see you right with this cheerful, warm-hearted take on a familiar comic tale. (Circles and Stalls)

Whisky Galore is a very slick production, never slacking in pace and holding the audience from start to finish. An impressive and enjoyable show. (Manchester Salon) 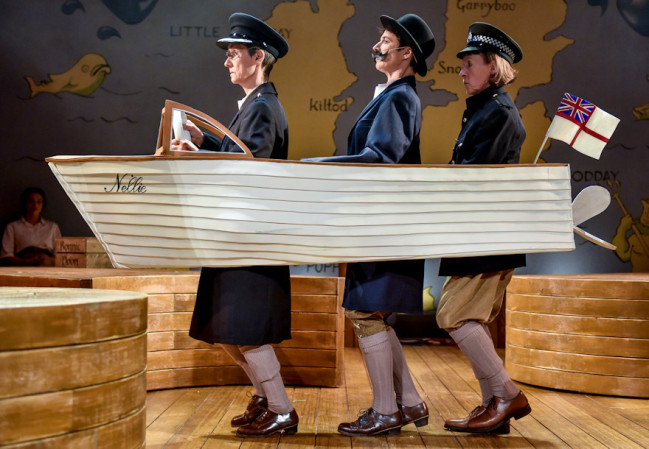 Telling the story of ‘Whisky Galore’ through seven players setting up in a Co-operative Hall relays a real essence of nostalgia and vintage quality, and a rare insight into a part of theatrical history that we owe a great deal to today. This talented septet bring the story to life as an irresistible ensemble filling the auditorium with laughter and fun. When gifted actors are set in the most unpromising of places, magic happens in the hearts of ordinary people. A fast moving, funny and entertaining version of Mackenzie’s novel. A ridiculously humorous tale. Utterly brilliant. (Elizabeth Stanforth-Sharpe - A Clock in a Thunderstorm)

Whisky Galore has sailed right into the New Vic Theatre bringing with it a seven-strong cast who explore Mackenzie’s creation with sheer brilliance via Philip Goulding’s adaptation. Deliberate prop mishandling, forgotten costume changes and stage mismanagement all add to the humour which is cleverly crafted and superbly delivered by the cast. An acting masterclass. Slainte! (babababoon.co.uk)

The mischievous cast bring heart and warmth to the comedy and cleverness of Compton Mackenzie’s Scottish wartime farce. These vibrant and charming women are here to make friends. (Arts York) 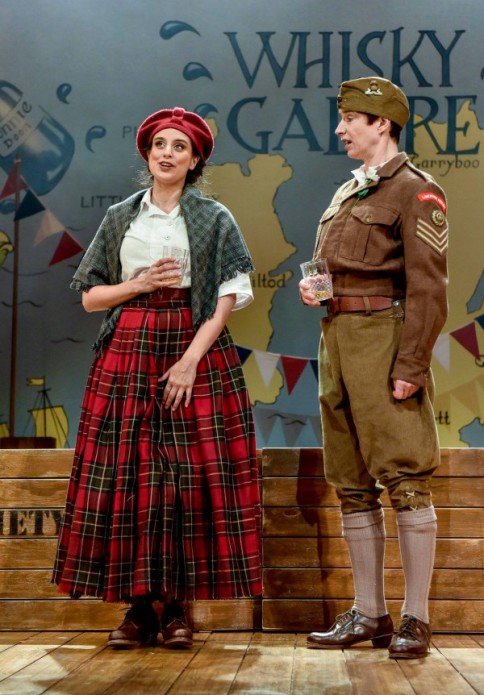 It’s a charming romp. Every member of the versatile cast grabs the chance to shine. This is a cast having fun at the same time as entertaining their audiences royally.

The cast of seven do a grand job, comfortably slipping between no fewer than 30 parts. They are certainly playing with our imaginations, as Co-op removal boxes become cars, bars and boat; and the use of a spotlight on a stand as a rotating lighthouse is so obvious, it’s brilliant. Having had no whisky at all, in the end they have so much to spare, they’re washing their hands in it. “This is the greatest night of our lives”, they cry.

The seven fantastic actresses absolutely light up the stage. (LiveMidlandsTheatre) 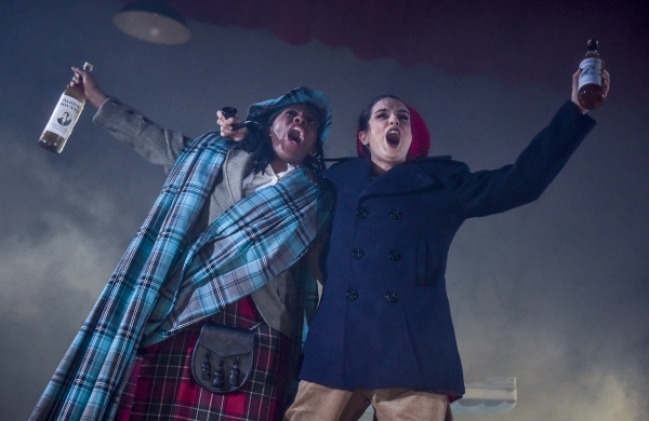 The meta-narrative of the Pallas Players offers a comedic touch, allowing for moments which deviate from the story and create a sense of complicity with the audience. With a cast of only seven, the diverse and vibrant characters are shared between the small ensemble, who switch between each role with style and ease, seamlessly adopting the mannerisms and accents that differentiates each from the others. The energy and talent of the cast bring charm, humour and life to this production, making it an engaging and endearing watch. (playstosee.com)

What a fun, feel-good production. The cast of seven worked together brilliantly, having the most spiffing time. Delightfully comic, zany moments; the audience were completely engaged. (Pocklington Post) 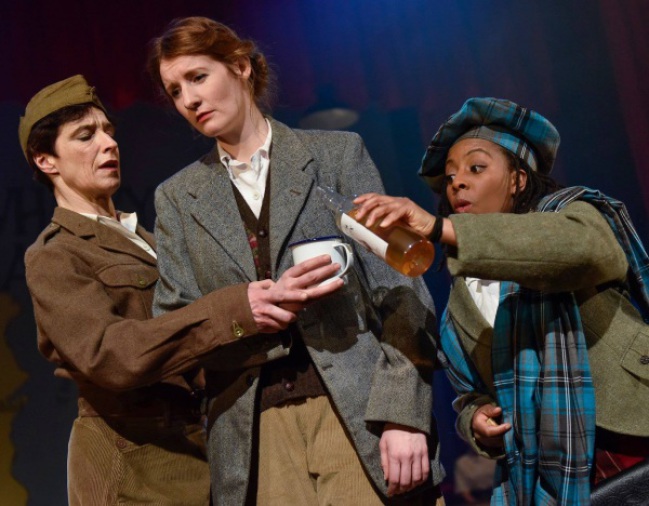 It's all great fun. The staging and the way the scenery and props are used to build an atmosphere and get laughs is very impressive. It's done with such verve and obvious enjoyment. (robmiles.com)

Waggett (Isabel  Ford) takes Fred (Shuna Snow) for a spin around the island in the Austin. 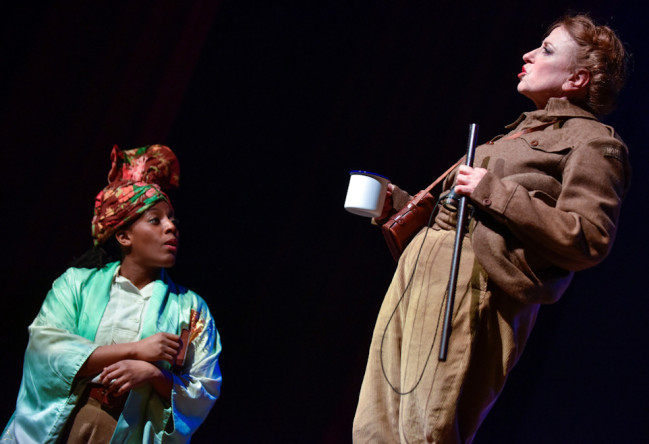 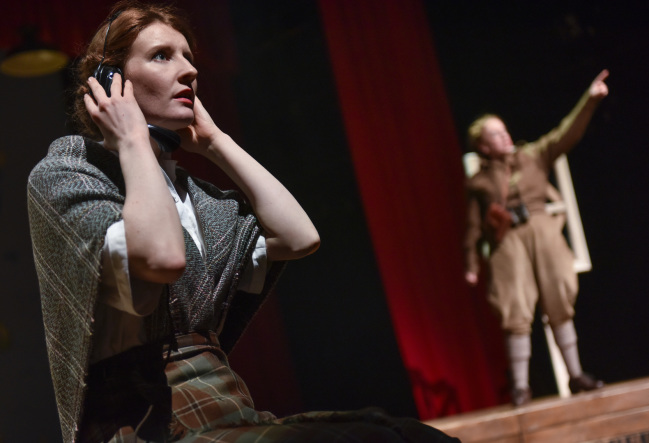 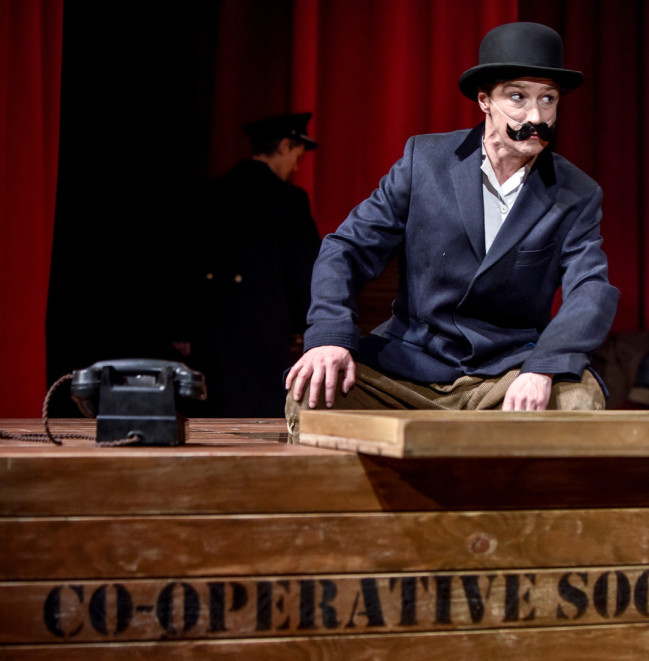 Top: Dolly (Alicia McKenzie) attempts to counsel her husband Paul Waggett (Isabel Ford), probably to no avail. Middle: Peggy (Lila Clements) realises that she needs to act quickly. Above: Major Quiblick (Shuna Snow) decides it's time to appear to be seen to be doing something.

To inquire about rights and availability relating to professional productions of Whisky Galore contact: 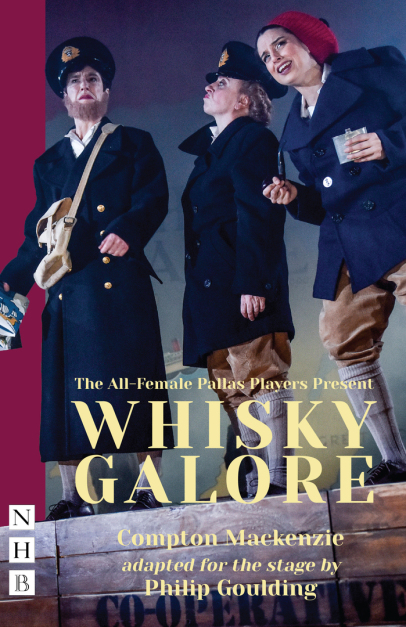