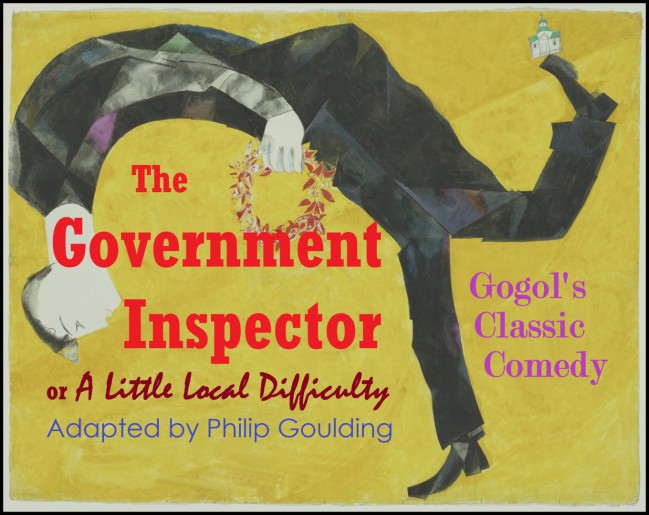 To inquire about rights and availability relating to professional productions

of Philip Goulding's version of The Government Inspector contact:

Fantastic. A really great night out.

Goulding presents a picture of a booming society

A fine tribute to Gogol.

A new version of Gogol's classic comedy about mistaken identity and small town corruption. A Mayor and his officials are alarmed to hear rumours of the arrival of a government inspector, travelling "incognito". It is brought to their attention that an apparently penniless rake and his servant are lodging at a local inn. Despite being unable to even pay their bill, this unlikely couple suddenly find themselves being treated like royalty by the sycophantic mayor and his cronies. The "Government Inspector" eventually rides away a good deal richer, having sampled for free the best hospitality the town could muster, including not just the finest food and wine, but also the feverishly competitive adoration of the mayor's wife and daughter. When the truth is revealed the Mayor and his officials are publicly humiliated. Finally, as if all of this wasn't devastating enough, a messenger appears to announce the arrival of a real Government Inspector. 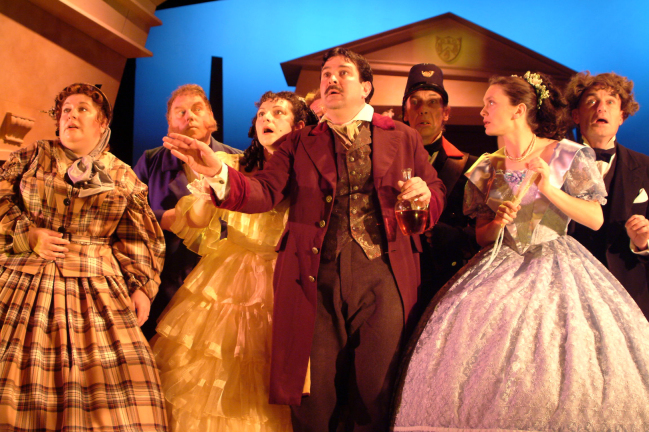 and sleaze in not very high places.

This hilarious and inventive adaptation. A great night out.

The action spins along at a cracking pace. Witty and racy.

Make no mistake, this is great. A sheer delight.

This new adaptation by Philip Goulding is fresh and funny. The result is delicious. (The Stage)

This adaptation by Philip Goulding gives a freshness to a gleeful peep at corruption in town life. Romping, witty and incisive.

An excellent play. It oozes comedy from beginning to end. 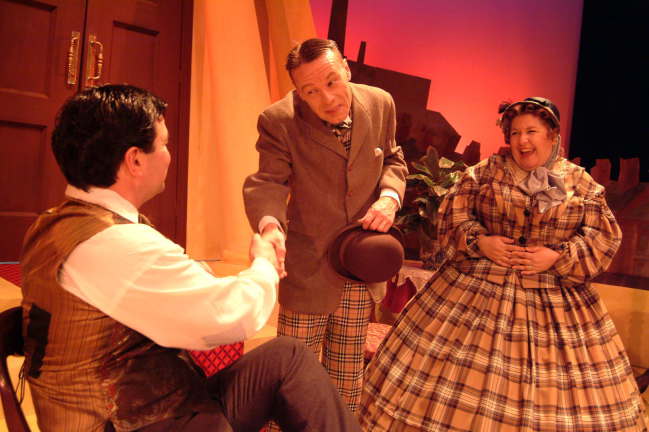 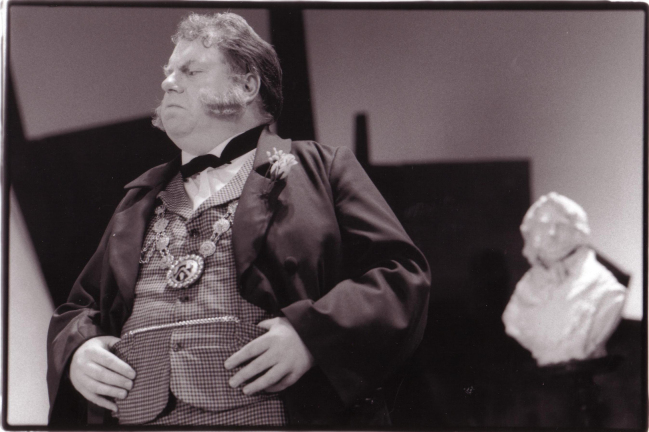 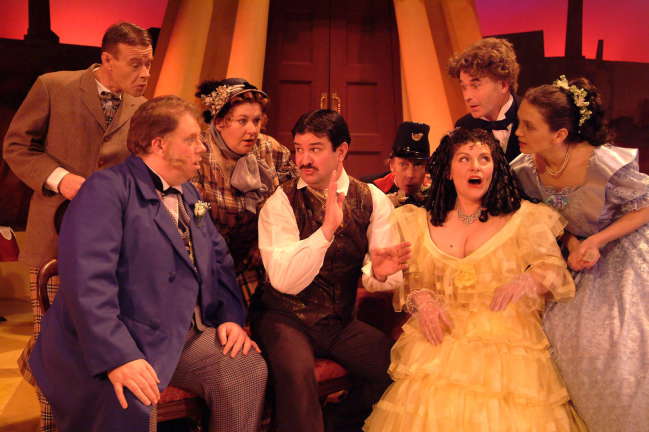 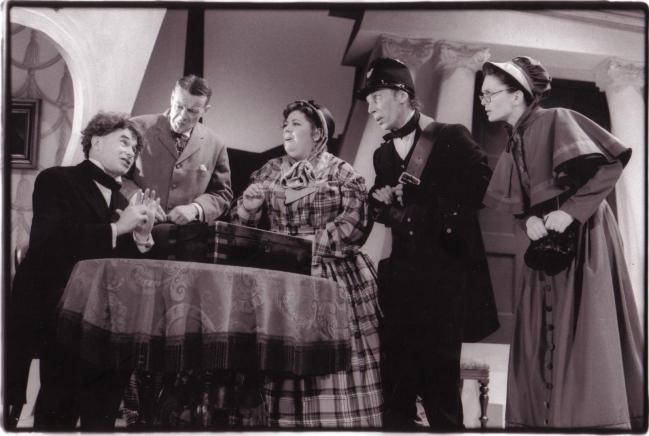 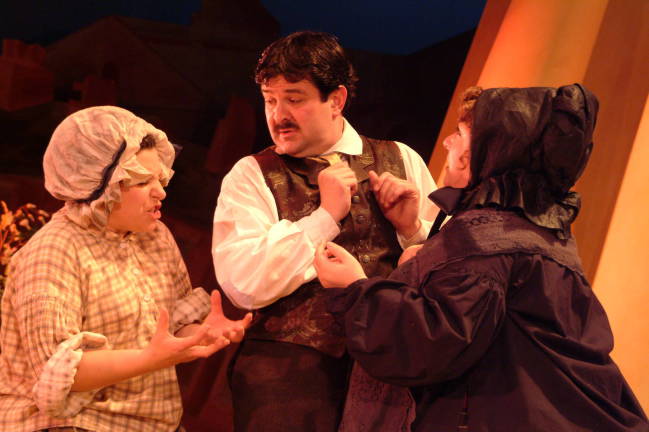 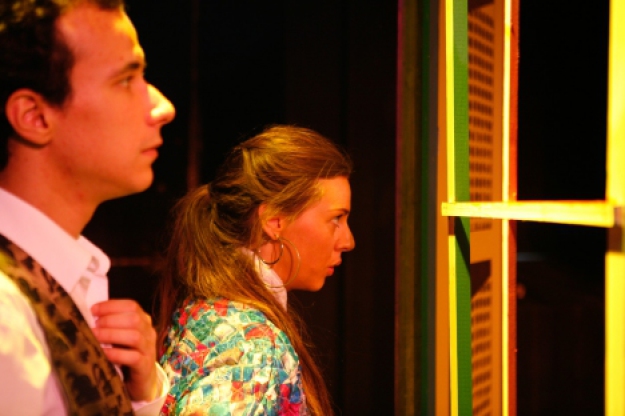 Theodor Spiridon as Philip Stein with Sarah Hastings as Mrs Robson in The Government Inspector or A Little Local Difficulty at the Courtyard Theatre, London – directed by Jason B Moore. Photograph by Eva Megias: www.evamegias.com Nikolai Gogol was born in the village of Sorochyntsi, present-day Ukraine. His father wrote a number of plays based on Ukrainian folk tales. As a child, Gogol helped stage Ukrainian-language plays in his uncle’s home theatre. Gogol’s Ukrainian stories - Evenings on a Farm Near Dikanka - met with immediate success in 1831. A second volume followed in 1832. Critics saw in Gogol the emergence of a Ukrainian, rather than Russian writer, whose works illustrated the differences between Russian and Ukrainian national characters. On setting out to write his masterpiece The Government Inspector, Gogol believed he had little chance of ever seeing the play performed. Indeed, difficulties were at first thrown in the way of its famous original production, as the chinovniks of the day considered it not sufficiently ‘well-intentioned’ in tone. And they’d have succeeded in suppressing such an outspoken satire, had an unexpected windfall not saved the situation. Gogol’s friend, the poet Zhukovsky, was tutor to the heir apparent, and he showed The Government Inspector to Nicholas I. The Tsar was so impressed, that, censors or no censors, he at once ordered that the play should be produced at the Imperial Theatre. Its first performance took place on March 19th, 1836, where Tsar Nicholas, laughed heartily throughout, remarking at the end, “Everyone has received his due, and I most of all.” The play was a hit. But it also caused controversy, pitting reformists against the conservatives who resented Gogol’s mockery of Russian officialdom. Spooked, Gogol left the country, and from 1836 to 1848 spent most of his time in Rome, working on his epic comic novel Dead Souls. He died on March 4, 1852, aged 42.

Illustration at top of page by Marc Chagall, 1917