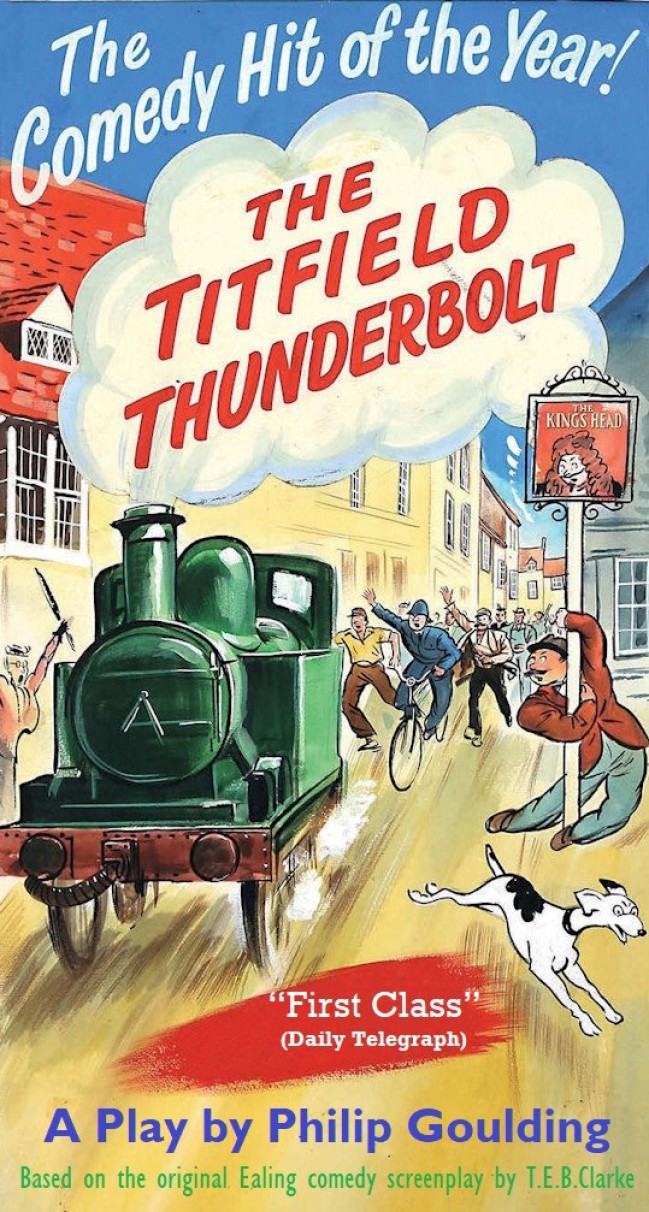 To inquire about rights and availability relating to professional productions of The Titfield Thunderbolt contact:

The branch line between Mallingford and Titfield is losing money and British Rail is intent on closing it down. In desperation the villagers exploit the 1947 Transport Act and decide to take charge and run it themselves - with a train resurrected from a local museum! As well as convincing the railway authorities that they are competent to work the line, they have to face problems from Vernon Crump who is set on providing a competitive bus service. All aboard for a rollicking evening of hilarious nostalgia!

Enjoyably chaotic. I found its dottiness an almost constant pleasure. Kate O'Mara takes to the stage to play a character undreamt of in the movie, the posh Lady Edna Chesterford, whose grandfather started the railway. Her diatribe against the interfering little Hitlers who run England with their clipboards memorably captures the subversive spirit of Ealing comedy. For collectors of cherishable English comedy, this show is a real find. Both funny and touching in its depiction of ordinary people's heroic fight against the interfering bureaucratic powers that be.

A big, gallant dollop of imagination. At one point, the town clerk is wrongly arrested for trying to destroy the train. Lady Edna protests to the arresting police constable: 'For goodness sake, he's a local government official, not a man of action!' Good line. It fits well alongside some pleasing rants against meddling bureaucracy in general. A happy evening, perfect for grandparents and children. And steam-train enthusiasts. 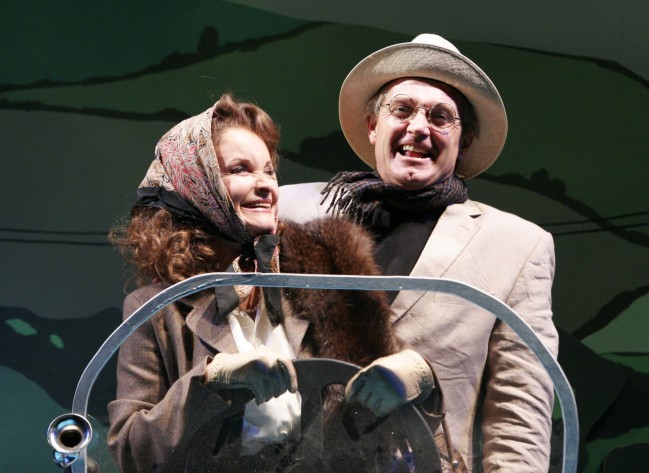 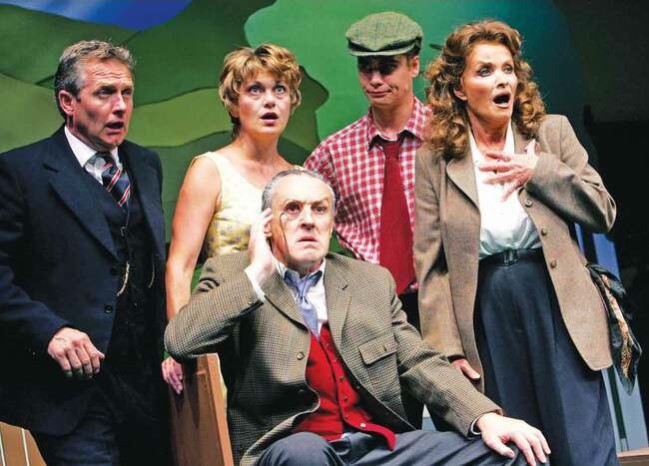 Top: Kate O'Mara and Steven Pinder as Lady Edna Chesterford and the Reverend Sam Weech in The Titfield Thunderbolt directed by Bob Carlton for the Queen's Theatre, Hornchurch, prior to a national tour by Bill Kenwright/CV Productions. Photograph by Nobby Clark. Above: Steven Pinder, Loveday Smith, Paul Leonard (seated), Philip Reed, and Kate O'Mara in the same production. Photograph by Tristram Kenton.

A little piece of old England was restored to the mantelpiece this week as The Titfield Thunderbolt started its run - with hilarious results.

What's clever about Bob Carlton's direction is that with only five actors it manages to twirl the audience into its own zany world. It's a fun evening and a romp in a very old, very British tradition with some marvellous theatre effects. What more could you want? (What's On Stage, 2005)

Philip Goulding's wonderful stage version. It's all dished up with hilarious consequences. Very funny. A good-natured and delightful play.

Philip Goulding’s adaptation of the classic Ealing comedy screenplay by TEB Clarke for The Titfield Thunderbolt shows what you can do with five actors, a minimalist set – and a lot of goodwill (not to mention participation) from the audience. It's a merit of the script that it's impossible to disentangle Clarke from Goulding. Gags about bureaucracy, jobsworths and the economic situation are as applicable today as in 1952. Great fun. (What’s On Stage, 2010)

It would be difficult to imagine a more perfect play than Philip Goulding's The Titfield Thunderbolt. It's a great version of a cherished story, cleverly staged and enthusiastically performed. (Fine Times Recorder)

A small cast of actors plays a much larger one of characters (not to mention a range of sound effects), aided by an assortment of wigs, hats and accents, and ably marshalled by the redoubtable Sarah Thomas, recently released from Last of the Summer Wine, and every bit as bossy as the lady of the manor as she ever was as Glenda. Between them, the rest of the cast play the vicar, the town clerk, a dipsomaniac entrepreneur, a policeman, three local ne’er-do-wells (two of them reformed), an actress, a feisty barmaid and several railway officials. And yes, it really is as much fun as it sounds. Titfield Thunderbolt is a first-class ride.

This marvellously madcap Thunderbolt is a theatrical treat. Making stage plays from novels is quite common, but to attempt this with a film screenplay - especially one involving a race between a train and a bus - is quite a challenge. Philip Goulding's version of TEB Clarke's script pulls it off with style. This highly innovative production races along, taking the audience into a zany world of nostalgia and feelgood fun. (Newport Newsroom)

Absolutely fabulous - that's the only way to describe The Titfield Thunderbolt. The show is a must for everybody. Excellently scripted... full of comic lines... the audience laughed continually... a comedy for all the family.

It is not often the theatre provides an evening of unadulterated fun - but that's the case with The Titfield Thunderbolt. It works beautifully. (Brighton Argus)

Philip Goulding's adaptation captures the fighting community spirit of the original. A host of amusing, acutely observed characters. The play touches a contemporary nerve, enlisting the audience's imagination and involvement, and it responds with delighted support. This rollicking production is pure fun.

Charming and mischievious. Rattling good fun. The play is full of gentle humour and permeated with affection not only for the railway, but also for the era, with authentic and thoughtful touches of the 50s throughout. Chockful of running gags. Heart-warming. A joy to behold. (Farnham Herald)

Leading the trip on the Titfield Thunderbolt were all the stock characters you'd expect in Ealing comedy - a posh, slightly loopy battleaxe of a country lady, a mildly eccentric vicar, a lovelorn boy pining after the vicar's niece, a dim-witted villain, and a sniffy representative or two of petty officialdom. This is laugh-out-loud humour. The actors are obviously enjoying every word of a beautifully written script. (Salisbury Journal)

Suffolk Summer Theatres' latest piece of wizardry sees the ingenious transfer from screen to stage of a British classic that captures the spirit of a bygone era.

The production is a glorious evocation of a bygone age. It's also a celebration of community and provides interesting echoes with today as more and more of our community services are being run by volunteers - everything from rural mini-bus routes to small-scale cinemas and arts venues.

A clever adaptation of a much-loved film. Full of fun and quirkiness. A wonderful evening's entertainment. (Isle of Wight County Press)

An evening of fun. This cheerful, delightful play.

A definite crowd-pleaser. (What's On) 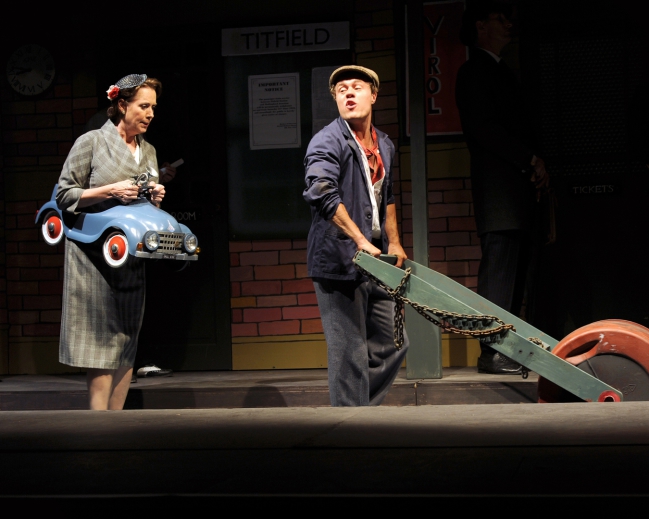 Sarah Ogley and Rikki Lawton as Lady Edna Chesterford and Harry Crump in The Titfield Thunderbolt at Suffolk Summer Theatres, directed by Mark Sterling and designed by Maurice Rubens. 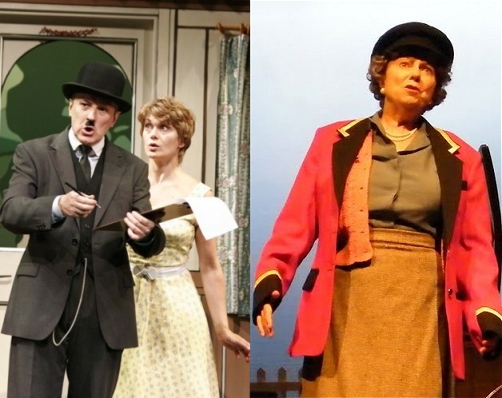 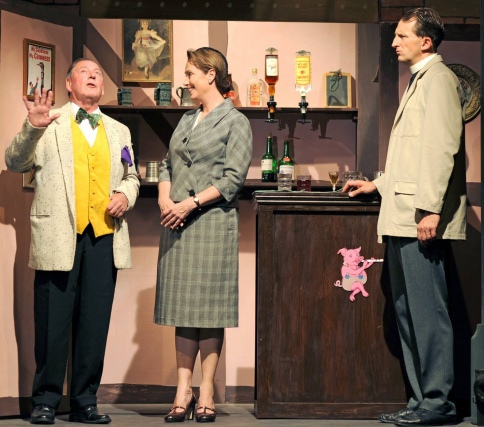 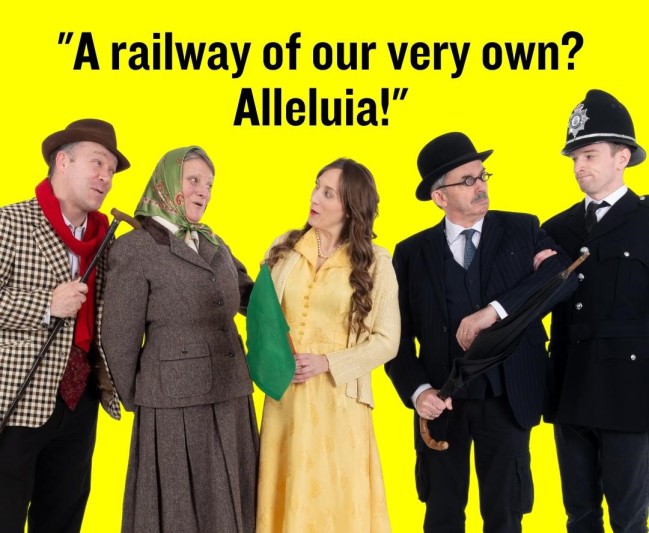 At Adlestrop and Ampleforth

Leaves lie on the line –
At Cockermouth for Buttermere,

At Luton Hoo and Swine.
The train is late at Bassenthwaite,

At Oyne and Auchmacoy,
Holmfirth and Hay-on-Wye, Haydock,

Or from Clackmannan Road.
At Ullesthorpe & Lutterworth, Pant,

Parsley Hay and Brock -
At Thornton for Cleveleys, no-one waits

And no-one winds the clock.

From Brampford Speke and Bluntisham,

From Gresford Halt (for Llay),
From Diggle, Delph and Saddleworth,

From Nigg and Gaminglay…
From Campsie Glen, Heckmondwike Spen,

From Shap and Abbeydore,
Plympton and Pimlico,

Stockbridge and Spooner Row,
Kelso and Westward Ho!
Oh, we shall go - we shall go no more.

And as she rolls across the night,

That ghost train makes the grade -
Through Campion and Cotton-grass,

Where once were sleepers laid -
Via Bryony and Bedstraw,

Thyme and Traveller’s Joy,
Through Rosebay and Meadowsweet,

To inquire about rights and availability for professional productions contact:

To inquire about rights and availability for UK amateur productions of The Titfield Thunderbolt contact the publisher: