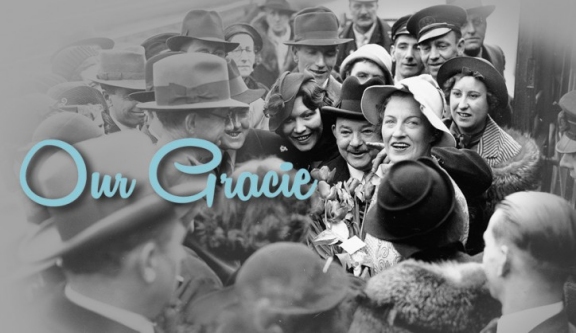 It's 1960, and Gracie Fields is back in Blighty to promote her autobiography Sing As We Go. The management of a friendly and ambitious repertory theatre persuade Gracie to collaborate with their talented and mischievous resident company in creating and performing an exciting new show dramatising parts of her amazing life story. In Our Gracie we join Miss Fields on a journey that begins before she even existed. We eavesdrop on the first meeting of her mother and father; we witness her being born; we see her as a millworker; we join her backstage and onstage during her time in ramshackle touring shows; and we're there with her as she achieves West End theatre and worldwide movie success. Along the way Gracie acquires huge wealth and a trio of husbands, survives a health scare, helps defeat Hitler, and has encounters with George Formby, Gerald du Maurier, Darryl Zanuck, Laurence Olivier, Vivien Leigh and Liberace. Though much of her wealth came from films, Gracie never much enjoyed the movie-making process; her greatest love was always live performance. In that vein, Our Gracie is not just intended as a tribute to Gracie Fields, but also as a celebration of playmaking, comedy and song - and a remembrance of those good old days when every town or city could boast at least one successful producing theatre.

In Sue Devaney’s uncannily fine impersonation it really does seem as if Gracie is back in the building. Fields's dreams come to life in an affectionate homage to Gracie’s progress from a flat above a chip shop to a villa in Capri.. Fans of Sally should find it right up their alley. (The Guardian) ☆☆☆ 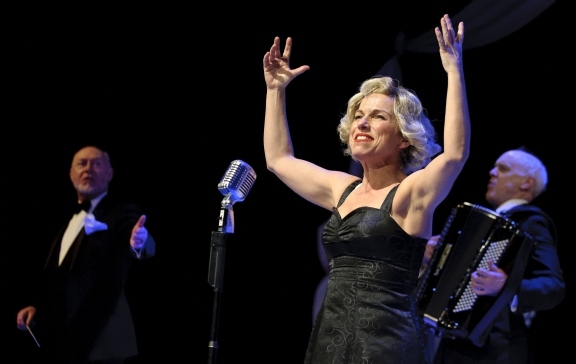 I cannot find one single fault with Our Gracie, it is a wonderful melding of new writing and old school glitz. Gracie Fields is brought back to life by the wonderfully talented Sue Devaney with a company of six who are so versatile you'd think it was a cast of a hundred. Playwright Philip Goulding should be incredibly proud of his creation, the attention to detail is astounding and to fly through seventy years of life in ninety minutes and still give the audience the opportunity to know how the subject ticks is no mean feat. I cannot recommend this performance enough, everyone tottered off humming away and feeling a bit happier. (Canal-st.co.uk) ☆☆☆☆☆ 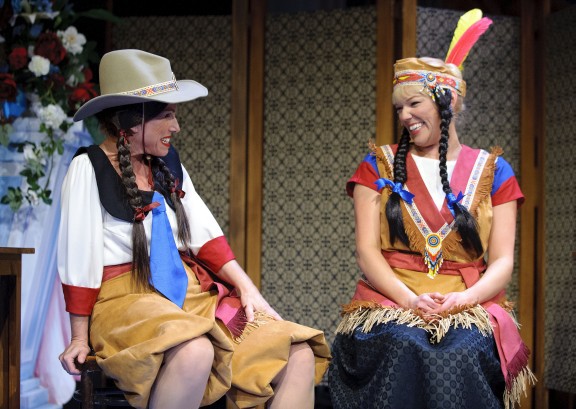 Sue Devaney and Liz Carney as Buffalo Lil and Dakota Sue in Our Gracie at Oldham Coliseum, directed by Kevin Shaw. Photograph by Joel C Fildes

Philip Goulding has created a cunning cross between a bio-pic and an ‘End of the Pier’ revue. It is driven forward by a sterling central performance, a bright vamping piano and all the cheeky chappie-ness of a classic Ealing comedy. This is a show with plenty of style. (Virtual Shropshire)

If Gracie Fields were to describe this show she would say, in her down-to-earth Lancastrian tones, “It’s a belting night out.” If so she would be doing it less than justice, because that may be so, but it’s also funny, clever, deftly acted and well written. We experience her life through a series of musical episodes; comically undercut by rep company banter and further lightened by audience participation it simply rockets along. The show had every thing for me and as a way of letting the post TV generation understand how important music hall was to the morale of the nation in hard times it should not only have a long run throughout the UK but should be on the curriculum of every media studies course. Go and see it – you can’t possibly leave disappointed. (North West End) 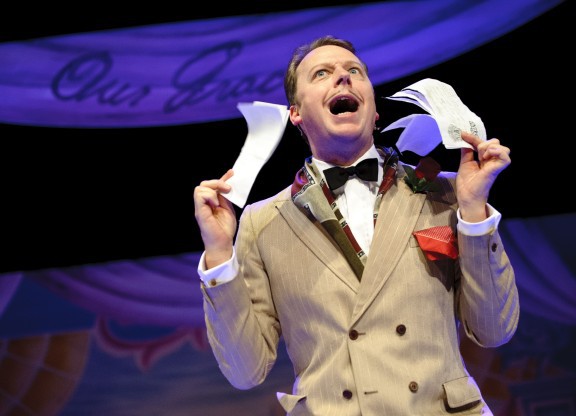 Jonathan Markwood as Monty Banks in Our Gracie. Photograph by Joel C Fildes

The story is brought to life in music hall style with songs, dance numbers and plenty of laughter. Our Gracie communicates the charm and warmth of both music hall and of Gracie. (Downstage Centre) ☆☆☆☆

Our Gracie is written in the style of the old music hall and incorporates live music and toe-tapping song along with movement and feel-good banter. Philip Goulding’s clever script documents Gracie Fields’ vibrant and inspirational life using her own words and infectious personality. It’s refreshing and engaging and there is a powerful harmony between the audience and the performers. Our Gracie is a wonderful trip down memory lane, filled with nostalgia and warm sentiment. (Upstaged) 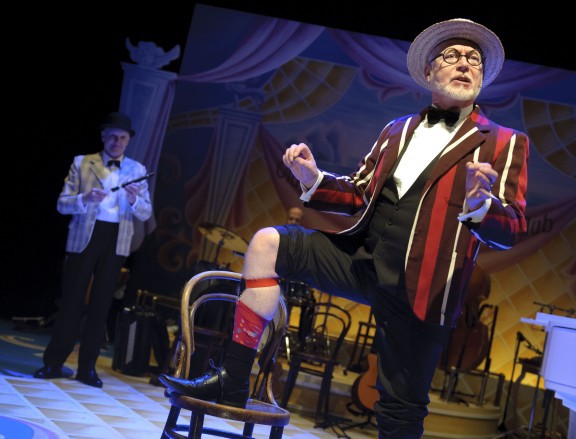 Dame Gracie Fields’ extraordinary life story is brought to life in a brand-new stage production. Her Rochdale-to-Hollywood tale has been well-documented but few attempts offer such a warm, funny and moving portrait of the female entertainer as Our Gracie. Written in the style of vaudeville music hall, the innovative stage production uses Fields’ own words to document her remarkable rise to fame. The story is brought to life with rousing songs, dance numbers and plenty of laughter, the actors speaking directly to the audience as they tell the funny, sentimental and at times, sad stories. In true music hall style, some of the acting is a little daft and over-the-top and the script is packed full of innuendos and “bad” jokes. Our Gracie is a touching tribute to Rochdale’s finest export. (The Reviews Hub) 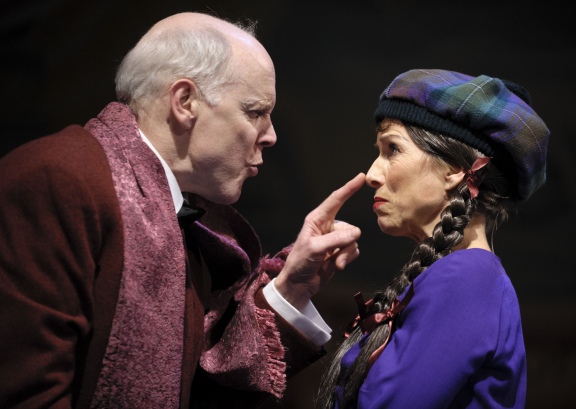 Our Gracie slots perfectly into the year which finally celebrates the importance and the impact of Britain’s first superstar. This really excellent show really isn’t one to be missed! (The University Paper)

A positive portrayal of the first lady of the British music hall stage. Our Gracie is superbly performed and well staged. It's a feel-good show that is a total delight. (British Theatre Guide) 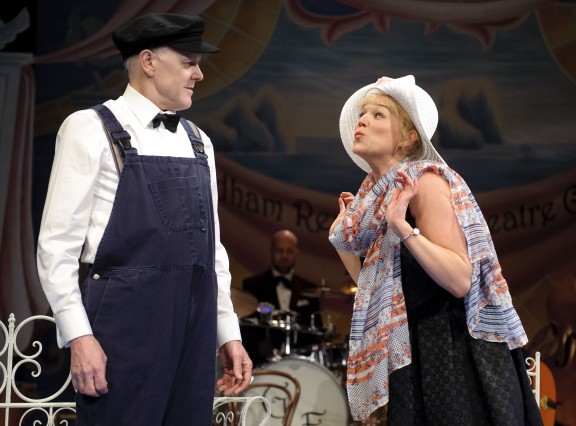 David Westbrook as Boris Alperovici is seemingly bamboozled by Liz Carney as Dolly in Our Gracie. Photograph by Joel C Fildes

Our Gracie not only brings together a genuine ‘rags to riches’ story but reproduces a whole era, starting in regional music halls and going on to big London revue shows and 1930’s and 40’s glamour and razzamatazz. It’s a world that is in so many ways no longer with us and this gives the show an added validity. Our Gracie is a fitting tribute and also a great night out. (Manchester Salon)

There is audience participation, singalongs, and loads of great double entendres and laugh-out-loud humour. The audience loved every minute. (Clitheroe Advertiser) 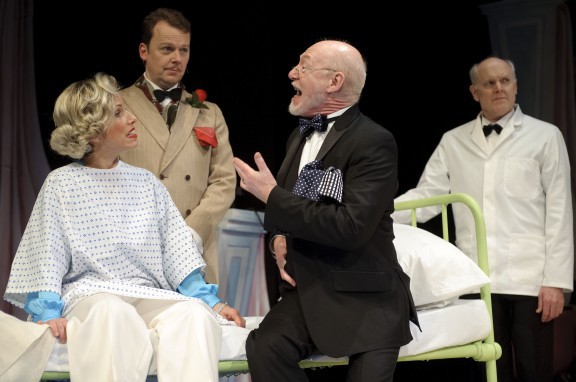 A fine celebration of a working class girl who made good. (Stoke Sentinel)

It seems that life really is a cabaret. As far as theatre-for-pleasure goes, it doesn’t get much better than this. (bumonaseat.wordpress.com) 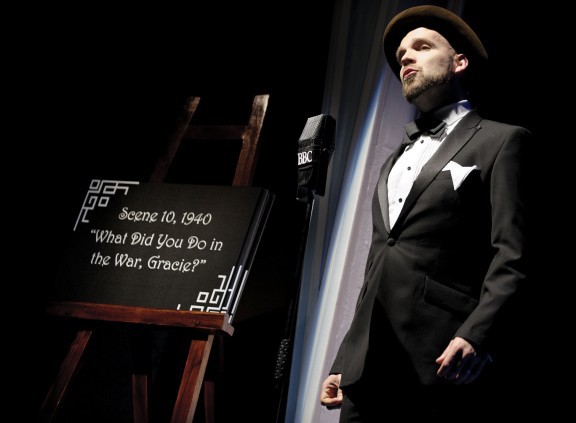 Matthew Ganley as Tom Tattle in Our Gracie. Photograph by Joel C Fildes

The audience lapped it up and went out happy. (Oldham Chronicle) 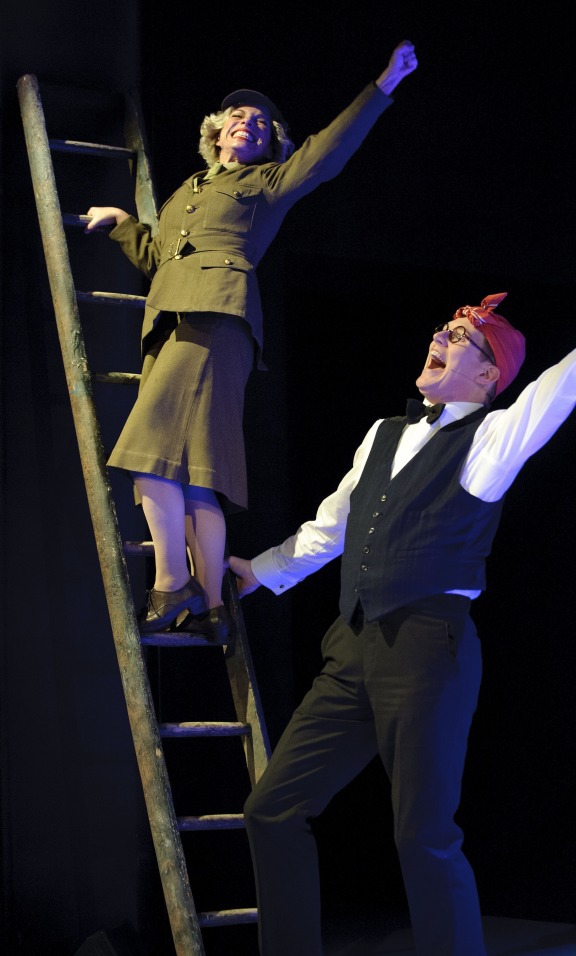 Ben Stock as Rosie the Riveter, with Sue Devaney as Gracie Fields in Our Gracie. Photograph by Joel C Fildes

The banner photograph is of the set model for the Oldham Coliseum production by Celia Perkins.